This weeks challenge is to tell a story using a mirror. I was pretty crazy in my youth and frequented many bars. Some of them upscale establishments, but most were hole in the wall type places. I honestly always enjoyed the seedier places. The music always seemed to be better and the atmosphere more interesting.

I especially liked the art work in some corners of these locations. The graffiti and stickers were always interesting. Whether it was the time someone actually took to create that “masterpiece” on the urinal divider or that obscure band sticker plastered on the cieling, it was always something different.

Last night reminded me of these very thoughts. I was in Austin having a good time and the place reminded me of then. Coincidently, the bar was called The Dirty Dog. I find this image fits perfectly into the Dog Wood Photography Challenege.

This image is called, A View From The Past. 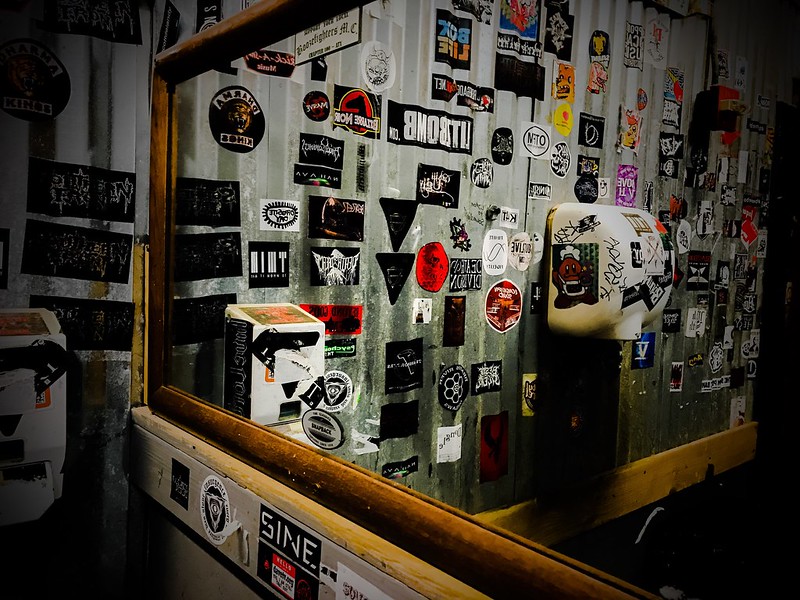 Week 3 of the 52 Week Photography Challenge is all about landscape. Per the Dogwood website, “Your inspiration for this week is land. This could be a landscape, or an image inspired by the land in some way”.

In my area of Texas, the landscape is pretty much flat, devoid of any meaningful forests, mountains, and pretty much comprised of all suburbs. Being that I work from home, and rarely visit locations other than the hockey rink and occasional car show, my landscapes are pretty much limited. That leaves my immediate surroundings as possible candidates for subjects. I could, of course, drive to find a more suitable location but, I’m honestly too lazy.

I’m not, however, too lazy to go on the occasional run about my neighborhood in the mornings. Now, I don’t mean like every day, but I have been known to go for a run every now and then. When I do go for a run it’s usually just before sunrise. I find this the best time to run due to the lack of people and a generally nice atmosphere and temperature. This also means I get some pretty epic sunrises if I can time it just right.

Along the route that I usually take, there is a park that runs adjacent to a large plot of land. The land has some acreage and is tightly manicured and has a pretty slick outbuilding or barn. The land is fenced off and posted with no trespassing signs. I always try to get shots and never seem to get what I think is the right light. I’ll stop and take a rest and just enjoy the view. Every once in a while I happen to get something useful. These images always make me hungry. They make me think of a hearty morning breakfast, bacon, and eggs. That feeling when you smell bacon in bed, that it’s time to get up and take the day by the…you get the idea.

This image is called Bacon and Eggs.

I had a seat frame/bracket dropped off on Friday that needed some serious help. I also need serious help in my welding skills, so it was a good fit. They get a fixed/restored part and I get to practice my welding if we can call it that. Behold the booger welds!

This weeks challenge is considered a technical challenge and is called SOOC, which stands for Straight Out Of the Camera. This means no post editing of any sort what so ever. I’m truly an amature photographer and I need as much help as I can get. This means no post editing may produce a garbage image, especially when I’m accustomed to the help. This is really due to the lack of experience with focal lengths, ISO, and camera functionality. I usually use post editing pretty heavily to get a specific look or feeling in an image that I was unable to achieve with the original image out of the camera. Some may consider the use of these tools a crutch, but I consider it just another tool. Let’s not get confused here, I’m not talking about Instagram filters, although I have used those as well, but you can get carried away pretty fast with those.

You can make an okay image look amazing with post production editing via Photoshop with highlights, contrast, and many other variables that deal with the images data. The lack of these tools would have made the challenge difficult for me if it were not for one of our damn dogs.

Cooper, also known as “Coopies”, is a 2-year-old AKC Rottweiler. He’s also a total train wreck in regards to veterinary bills. Cooper was the first pet we’ve ever purchased. We usually would rescue animals into our home from shelters or off the street. I couldn’t tell you exactly why we decided to purchase Cooper other than we had some concerns and thought that getting a full blooded certified AKC breed would not have genetic disorders. Yeah, that worked out real well for us as you’re about to see.

At the young age of 9 months, Cooper started to develop duck feet. I don’t mean webbed feet, I mean his paws were pointed outward in a “V” shape. We also noticed he would start to limp periodically and whimpered every now and then when chasing his brother Jackson. Jackson is a 5-year-old Black Lab mutt, and is also healthy as a horse. Coopers’  symptoms progressively got worse and we had to take Cooper in to see the veterinarian. The prognosis was not good, our puppy would need surgery.

like usual, we had won the train wreck lotto, yay! Of course, after learning about Elbow Dysplasia and the cost of surgery, people chimed in with, “I’d put him down”, “why would you pay that for a dog”, and other nonsense. Fair enough, they may have had a point, but our pets are part of our family, so we dug up the funds and got Coopies all fixed up.

The last year and a half have been great for Cooper. He loves to chase squirrels in the back yard that he’ll never catch in a million years. You know, dog stuff.  We thought that the worst was behind us and Cooper could chill and be the awesome dog that he is. Everything was going swell until we came home from vacation two weeks ago. While we were away on vacation Cooper decided he was going to get those squirrels once and for all, because he apparently ran so hard that he tore his ACL. Yeah, that’s right, the dog tore his ACL. Seriously. Little did I know that this is apparently very common and a major income stream for orthopedic veterinarians.

Since Cooper was severely limping and not getting any better, we took him to the veterinarian. The ACL tear was very quickly diagnosed and Cooper is now scheduled for surgery tomorrow, January 9th, 2017. This will be his second surgery, and from what his surgeon says, will most likely not be his last. 50% of all dogs who have torn one ACL will tear the other one. Awesome.

This brings me back to the 52 Week Photography Challenge and why I chose the below image as my week 2 photograph. The story.  All of these challenges specifically say to tell a story. I understand that this is meant figuratively and that the story may indeed be in the eye of the beholder. The story I choose to see in this unedited photo is regret. A dog who looks back on that line of trees and says, I shouldn’t have gone so hard and so fast. Ha! The title of this image is Squirrels and ACL’s.

**The above images were edited. The below image is SOOC. 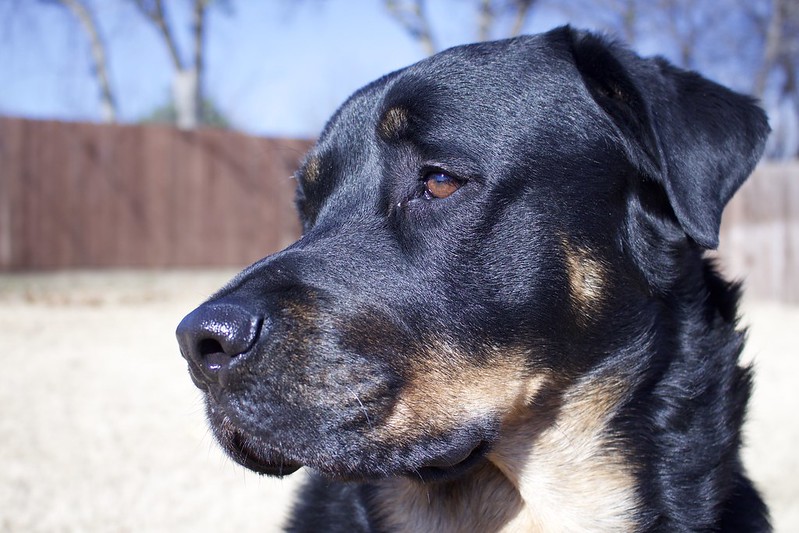 B&T Garage is more than just my documented experiences while learning how to work on my own car, Foxy Molly. It’s a creative outlet that allows me to learn photography, videography, and the tools used to edit and produce those mediums. I’ve never received any formal training on what it takes to produce intriguing photos or professional video and I think that’s pretty apparent based on my B&T Garage youtube channel. It’s also apparent that the quality and production quality has increased with each corny release of the series. In order to continue to improve upon those skills, one has to continue to learn and challenge one’s self.

As with any learning process, mastery comes with knowledge and repetition. Finding interesting ways to collaborate, get feedback, and have fun while learning can be difficult at times. This is why I’m always looking for new ideas for content, VLOGS, and photos. By creating content, regardless of the audience, you force yourself to learn. As long as each learning repetition adds some sort of challenge you will progress. This challenge could be a change in how you set up your lighting, switching your filming style, or even changing what you’re accustomed to photographing.

This desire to learn more lead me to a post on my personal Facebook feed. Dale Foshe posted an article on petapixel.com. The article described a skill building challenge for photographers created by Dogwood Photography. The challenge was originally started in 2016 and tasked beginner and experienced photographers alike to push their photography skills to new levels. The overall challenge was to take a specific photograph every week for 52 weeks. The subject, story, composition or technical requirements for each photo would change week to week. The participants could then post their challenge results weekly to various social media sites such as Flickr, Facebook, and Instagram.

This year the challenge is more difficult in regards to the photo requirements. I didn’t participate in 2016 because I was unaware that this challenge even existed, but I’m totally onboard for 2017. Being as it’s the first week in 2017 I better get going on this weeks photo!

Check back here every Sunday for the challenge photos.

What’s better than a cold beer? Cold beer with your best friends and Top-Fuel drag racing. We spent all day at the Ennis Texas Motorplex watching the big boys run and had pretty good time doing it.

The journey of Foxy Molly is a never ending one. It started 3 years ago and began to gain some steam in 2016. Check out the B&T Garage youtube channel to follow along and remember to click on subscribe!